The laboratory is accredited since March 2003 for measurements of activities of gamma-ray and x-ray emitters in cylindrical homogenous samples with high-resolution gamma-ray spectrometry. According to the scope of accreditation, measurements  of liquid or solid samples that can be crushed (ground) and homogenized can be carried out.

Short measurements are performed in a single day and those requiring longer measurement times within three working days. Please do not hesitate to contact us for any further details on the types of measurements, prices and other relevant information.

Measurements of activities of gamma- and X-ray emitters in samples:

We perform all kinds of measurements of gamma-ray and X-ray emitters:

We perform about 1000 measurements (10000 determinations) per year.

Measurements are performed according to the quality assurance program:

The accreditation according to the ISO/IEC 17025 standard assures the high quality of measurements carried out by the laboratory and gives our customers to have full confidence in the work carried out for them.

To provide high quality efficient service to all customers, any complaints or suggestions for improvement are welcome.

Laboratory for radioactivity measurements was established in 1981. Measurements of activity concentrations and/or specific activities of radionuclide emitting gamma- or X- rays in the energy region between 5 and 3000 keV are carried out. Calibrated semiconductor detectors are used for the measurements. Classical calibration methods proved to be inconvenient because the samples to be measured come in a large variety of dimensions, densities and matrices. Therefore, in the beginning of the eighties, the calibration method with point sources was developed. With this method it is possible to take into account the actual values of sample parameters (thickness, density, and composition) and the container housing the sample (radius, bottom thickness, density, material). In the nineties the method was upgraded with the calculation of coincidence corrections and automatized. The procedures for quality assurance and quality control of measurements and analysis were introduced.

The laboratory is currently in the process of upgrading acquisition hardware system from the analogue to the digital platform. The integration of the digital system into existing routine measurement procedures is running in parallel, so that the workflow of the laboratory is not affected.

The decision-threshold and detection-limit calculator (the Calculator) is a simple Excel tool for calculating the decision thresholds and detection limits for gamma-ray emitters from high-resolution gamma-ray spectra. The decision threshold and detection limit, the characteristic limits, quantify the sensitivity of the measurement. They determine the amount of the activity or activity concentration in the sample, which can be detected or quantified with a predefined probability. Two input quantities are necessary for calculation: The smallest number of counts due to a gamma-ray emitter, which can be extracted from the spectrum with a predefined probability, and the conversion factor, which converts these numbers of counts to activities or activity concentrations. The Calculator computes only the numbers of counts, the conversion factor has to be supplied by the user.

Since gamma-ray spectra exhibit an energy-dependent continuous background, the smallest number of counts belonging to a signal due to a gamma-ray emitter, which can be recognized in the spectrum, depends on the uncertainty of the background where it is superimposed. In the absence of the signal from the gamma-ray emitter the smallest number of counts depends just on the height of the background at the energy where the signal should occur. If the signal is present, then the numbers of counts corresponding to the characteristic limits may or may not depend on its intensity, depending on the method of its calculation.

In computerized peak-analysis of gamma-ray spectra two methods of peak analysis are usually applied: the Region-of-Interest method and the Least-Squares method. The Calculator comprises procedures for calculating the numbers of counts corresponding to both characteristic limits according to the two methods, both for the case when the signal due to the gamma-ray emitter is isolated as well as for the case when it overlaps with the signal of another emitter. It can compute the numbers of counts also in the presence of the peaked background. Since gamma-ray emitters may radiate at several energies, it comprises also a procedure to calculate the common number of counts corresponding to both characteristic limits.

Since the standard ISO 11929-1:2019 Determination of the characteristic limits (decision threshold, detection limit and limits of the coverage interval) for measurements of ionizing radiation – Fundamentals and application requires reporting of characteristic limits for all measurands of interest, regardless whether their presence in the spectrum was recognized or not, the Laboratory for High Resolution Gamma-ray Spectrometry feels obliged to make the procedures developed accessible to the community engaged in gamma-ray spectrometry measurements. 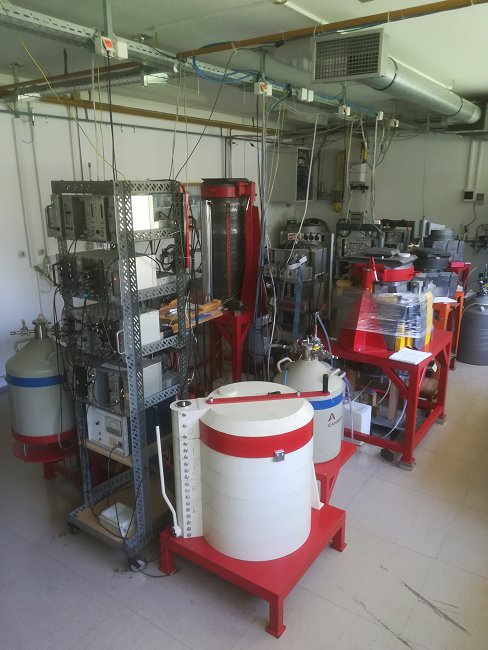 Laboratory for radioactivity measurements (LMR) is engaged with measurements of amounts of gamma or X-ray emitting radionuclides in samples from living and working environment.

Laboratory is market-oriented and sees its purpose of existence in service to the industry and society. It is accredited for laboratory measurements of activities of gamma-ray and x-ray emitters in cylindrical homogenous samples with high-resolution gamma-ray spectrometry.