INSIBA experimental chamber is attached to PIXE-ERD beam line at the 2 MV tandem accelerator at Jožef Stefan Institute (JSI), Slovenia. The set up allows creation of displacement damage by implanting high energy ions at a given sample temperature for simulation of irradiation damage caused by neutrons in fusion reactor. Samples can be simultaneously or sequentially irradiated by high energy ions and exposed to a well-controlled flux of atomic deuterium or to deuterium ions from an electron cyclotron resonance (ECR) ion gun. The sample is mounted on a holder with temperature controlled heater, capable of heating the sample up to 1200 K. The resulting deuterium depth profile is measured by the nuclear reaction analysis (NRA) method utilizing D(3He, α)p nuclear reaction. For one depth profile typically six analysing beam energies are used ranging from 0.7 MeV to 4.3 MeV. The proton detector used for the NRA measurement is mounted at a 160 degree scattering angle. Another detector is mounted at the 165° angle and is used for Rutherford Backscattering Spectroscopy (RBS) technique which determines the irradiation dose and depth profiles of species that are heavier than the probing beam ions.

The set up can be changed also for experiments with ERDA method, where detection of elastically recoiled particles is performed. There a small glancing angle of the probing ion beam with respect to the sample surface is needed as the recoiled particles exiting the target in the forward direction are detected. In our case typically 4.3 MeV beam of Li ions is used and is directed to the target at 15° glancing angle with respect to the sample surface. Li ions were used since they give better depth resolution as compared to the He ion beam due to the higher stopping power and the surface peaks of H and D are further apart. 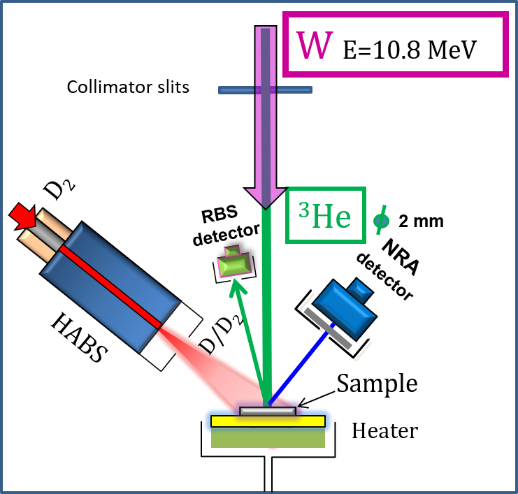 The set up enables: 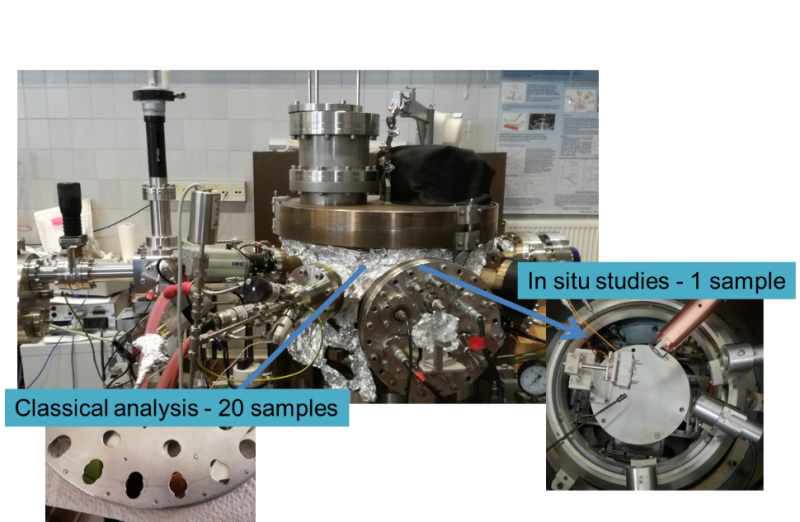 Within our fusion related program we are performing experiments with vibrationally excited H₂ and D₂ molecules. For this purpose, a specialized unique vibrational spectrometer has been built. Its operation is based on the properties of dissociative electron attachment (DEA) of low energy electrons (0-5 eV) in hydrogen. A magnetic field is used in this spectrometer for guiding the electron beam and for extracting and separating H- and D- from heavier ions and electrons. Original ion extraction system based on penetrating electric field was constructed for focusing and detection of low energy ions. 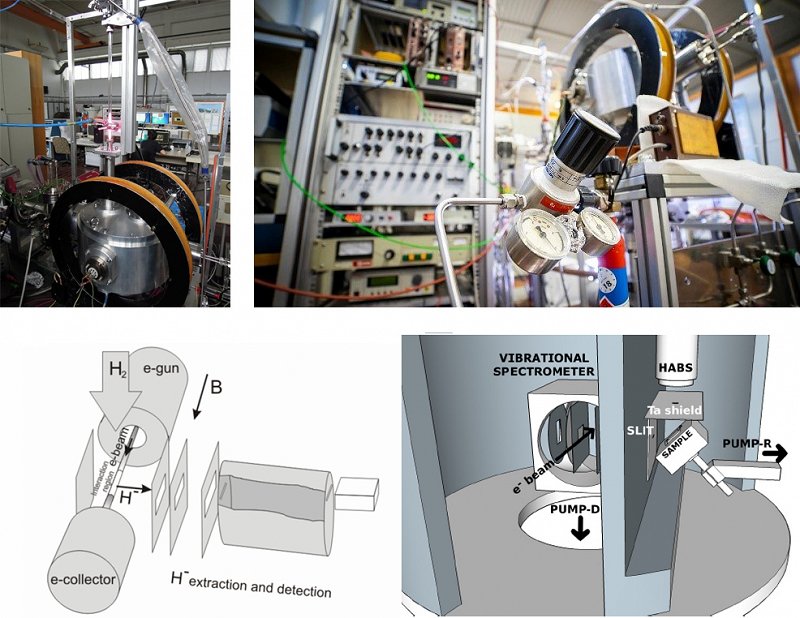 Studies of vibrational population of hydrogen molecules are performed, which are created by:

New data are acquired on DEA in H₂ and D₂.

A sample holder is mounted on the flange facing turbo-molecular pump. Sample can be linearly heated up to 1100 K and exposed to hydrogen atom beam from HABS. Ammonia is introduced through a side leak by small stainless steel tube directed to the center of the sample. NH₃, D₂, or a mixture of both is introduced through HABS, and the gas composition in the chamber is monitored by RGA either by recording the entire mass spectra in the 1–100 amu/e range or by recording the time variation of a set of characteristic mass peaks in the spectrum [multiple ion detection (MID) mode]. 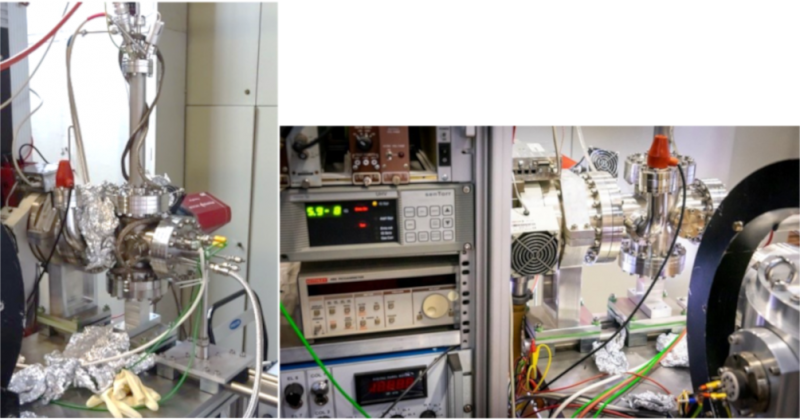 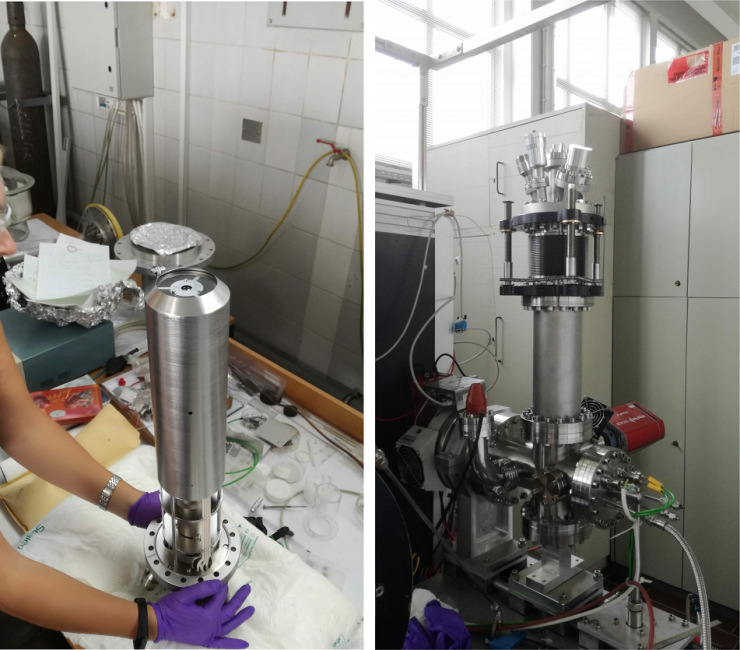 Photos:  Auger electron spectrometer before mounting (left) and as mounted in the UHV system (right).

The spectrometer for Auger electron spectroscopy is intended for the analysis of the surface of various materials, and in particular allows: determination of contamination of samples with hydrocarbons, oxides; analysis of the amount of adsorbed molecules on the studied samples and analytical composition of thin layers. 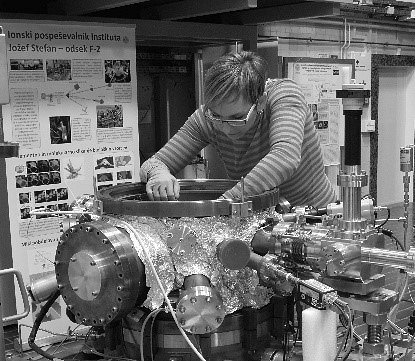 Fusion research in the department F2 of the Jožef Stefan Institute has started in 2003 with a project at EURATOM. The project subject was to contribute in the field of atomic processes in edge plasma of a tokamak. The main goal is to study processes with neutral hydrogen atoms and molecules interacting with materials relevant for fusion. From the very beginning the use and development of ion beam methods at Tandetron accelerator at Microanalitical center have been progressing hand in hand.

Particular impetus for the research was the organizational change of the European program to the strategic goal for successful construction and operation of the international ITER tokamak. The European research has been coordinated by the newly established EUROfusion Consortium and our work is strongly integrated within Work package “Preparation of Efficient Plasma-Facing Component (PFC) Operation for ITER and DEMO˝ (WP PFC).

The Laboratory for fusion research was founded in the year of 2019 when the Fusion technologies program group was established at IJS. Our group has been part of Slovenian Fusion Association from the very beginning. We have a very active collaboration with other laboratories working on fusion in particular with Forschungszentrum Jülich GmbH, Max-Planck-Institut fur Plasmphysik, Garching, Aix Marseille Universite, CEA, VTT.

The main research in the laboratory is related to plasma wall interaction. In our research we exploit ion beam methods that have been under development at the 2MV accelerator laboratory <link> where we have constructed a special beam line and chamber. With methods like NRA and ERDA depth distribution of hydrogen isotopes can be followed in-situ and in real time during specific experimental exposures of samples to hydrogen. In our laboratory we have also constructed and developed a unique spectrometer for detection of vibrationally excited hydrogen molecules. The detection method is based on dissociative electron attachment into hydrogen molecules. In the laboratory we have also constructed an ultra-high vacuum chamber where a mass spectrometer is used to study adsorption and desorption of gases to and from materials. 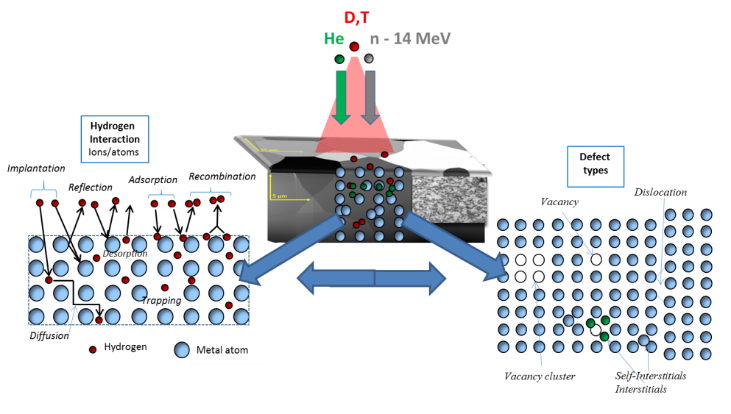 The main area of expertise is the study of hydrogen atom interaction with materials for fusion:

Spectroscopy of vibrationally excited hydrogen molecules - study of their production on surfaces and their interaction with materials.