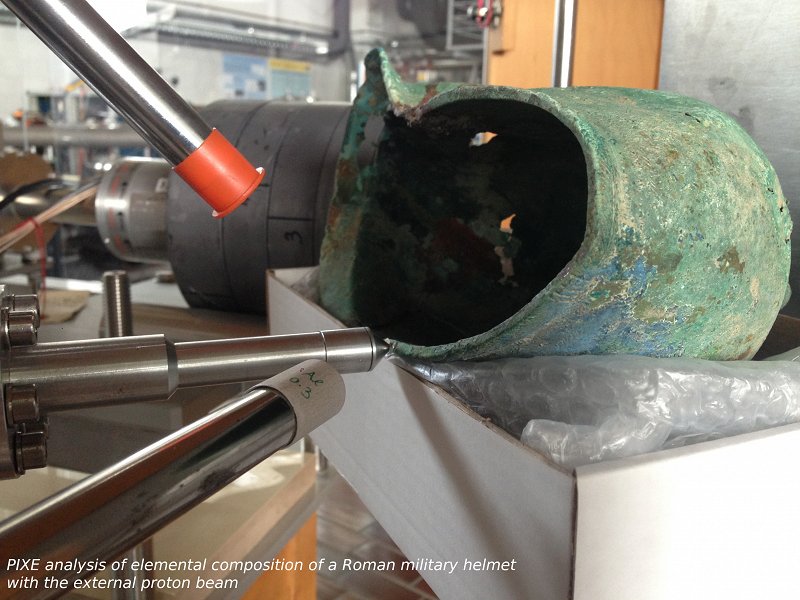 Chemical analysis of archaeological and historic objects and objects or art can tell us important data about their provenience, method of manufacture or exploitation and trading of raw materials. It is desirable that the analytical method is non-destructive, so the measurements can be done in situ and the heritage objects can be preserved for future generations. All these requirements are met by ion-beam spectroscopical methods performed by a proton beam extracted into the air. The measuring station for in-air measurements is equipped with spectrometers for emitted X-rays and gamma-rays, which are the basis for the methods of PIXE and PIGE, respectively. Optionally, the scattered projectiles can be detected as well, which allows investigation of sample surface layers by elastic (Rutherford) spectroscopy. The proton beam is focused by magnetic lens before exiting a thin window of silicon nitride. By moving the sample in xy direction it is also possible to make elemental maps with the spatial resolution of 0.1 mm. Several types of materials are currently investigated in collaboration with the curators of the National Museum of Slovenia as well as other institutions:

a) Archaeological metals. The current research involves studies of functional use of metals in Roman military equipment, studies of Iron Age bronzes and various studies in numismatics. In our work we studied the introduction of brass as material during the 1st c. BC and pointed out what kind of metals were used for specific parts of Roman military equipment. We developed the method of differential PIXE, which is based on a series of measurements with different energies in the same spot. As the protons reach different depth below the surface, it is possible to reconstruct the concentration profiles. In this way we studied thin metal plating of tin, silver, and gold. The technique of fire gilding was identified on Late Antiquity objects. The composition of trace elements in copper alloys allows us to identify modern fakes. The composition of coins can show different minting phases and using a specific metal source.

b) Prehistoric, Roman, Venetian-type and modern glass. Glass is typically made of three mineral sources: silica, alkalis used as flux and chemical stabilizer of earth-alkaline oxides; as these source are usually impure, it also contains decolorizers and pigments.  Glass is evidently composed of number of elements from lightest to heaviest. Most of them are detectable by PIXE, while the lightest emit too soft X-rays to penetrate the detector entrance windows. As the nuclei of light atoms are excited by protons to emit gamma-rays, we developed a combined PIXE-PIGE method for the analysis of glass and minerals. The most exciting results of the lab was analysis of early medieval glass, showing two distinct glass types: one was produced of alkalis known as Egyptian natron, while the other were made from the ash of halophytic plants. As the time marker between the two glasses is about 800 AD, the composition of glass beads in the early medieval graves can be used as an independent dating method. Current research involves composition and typology of Late Roman glass and glass produced in forest glassworks during the first half of the 19th century.

c) Pigments and organic materials. PIXE is a sensitive method to determine the type of pigments made of metal oxides; however, care must be taken at irradiation doses not to induce radiation damage. Recent investigations include studies of the pigments in the hand-dyed illustrations of a 16th c. book. PIXE was also use for identification of early photographic techniques.

We further combine IBA methods with analytical methods in other laboratories, such as X-ray fluorescence (XRF) in new portable apparatus, or neutrons-based methods that can reach bulk material below the sample surface.