Publication of Two Papers on the Characterization of Lithium-Sulfur Batteries 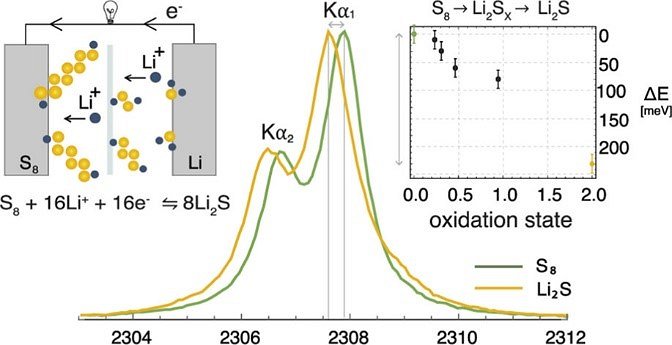 Within the Laboratory for applied X-ray spectroscopy, we are currently exploring the capabilities of X-ray emission spectroscopy (XES) to characterize electrochemical processes in batteries based on a sulfur cathode. At the moment X-ray absorption spectroscopy (XAS), performed at synchrotrons, is most commonly used in such analysis. On the other hand, XES spectroscopy can also be successfully performed in a smaller laboratory, which removes the access limitation and could speed up the technological development of sulfur batteries.

Within this work, which is performed in collaboration with colleagues from the Laboratory for Modern Battery Systems at the National Institute of Chemistry, we have recently published two papers on the characterization of lithium-sulfur batteries using sulfur XES. In the first paper, published in the Applied Energy Materials, XES was used to determine average sulfur charge during battery discharge. Within the second paper, published in the Chemical Communications, theoretical modeling of measured XES spectra was used to identify different sulfur compounds and determine quantitatively their relative amounts.

link to the first paper

link to the second paper

Virtual Seminar at the Accelerator

Our colleague Dr Sabina Markelj will give a virtual seminar entitled "Influence of defects of hydrogen isotope retention in tungsten: the role of ion channeling in these studies". The lecture is organized by the Centre for Micro Analysis of Materials (CMAM) at Universidad Autonoma de Madrid

Invitation to the Exhibition in the JSI Gallery

You are kindly invited to the exhibition "In the Kingdom of Roots", which can be viewed in the Gallery of the "Jožef Stefan" Institute until September 6, 2021.

Publication of Two Papers on the Characterization of Lithium-Sulfur Batteries

Colleagues from our lab have, together with colleagues from the National Institute of Chemistry, recently published two papers on the characterization of lithium-sulfur batteries using sulfur XES. The first one was published in the Applied Energy Materials, the second one in the Chemical Communications.